The Basics of TMS Therapy

TMS has been researched for more than 30 years.  In the United States, it was first approved by the FDA in 2008 for the treatment of major depressive disorder in adult patients who had tried medications with no satisfactory results. Since TMS has proven to be effective for the majority of patients treated, researchers are now studying its effectiveness for many other psychiatric and neurological conditions.

iTBS (SNT Protocol) is an evolution of TMS therapy that uses more frequent, lower intensity, stimulation 10 times/day for 5 consecutive days and has shown to produce a significantly higher rate of patient reported remission of symptoms than Classic rTMS protocols. At Scenic City Neurotherapy, both Classic rTMS and iTBS (SNT protocol) have two ketamine infusion boosters built in to the treatment regimen to enhance global optimization and produce a more comprehensive, long lasting remission of symptoms. 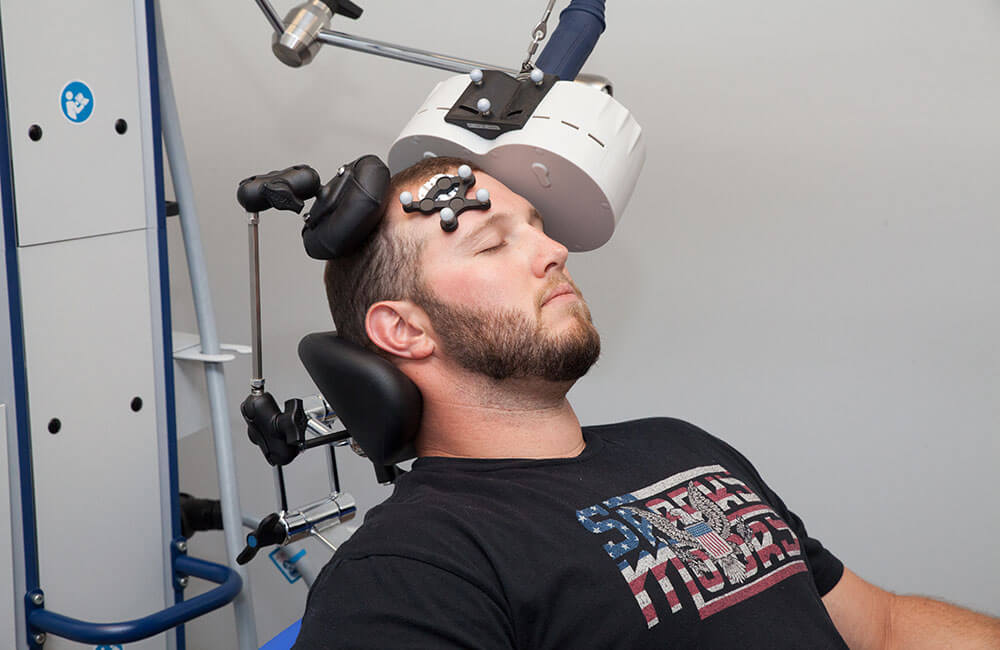 Patient outcomes are our number one priority. This is why we chose the most advanced FDA-approved rTMS therapy system that offers neuronavigation. Neuronavigation helps to ensure precise coil positioning with every patient treatment – thus enhancing optimal outcomes for a much-improved quality of life.

The Magstim name is at the forefront of Repetitive Transcranial Magnetic Stimulation (rTMS) from its conception as a widely used research tool to its revolution for treatment in the clinic setting.

Stanford has developed a protocol featuring intermittent theta burst stimulation (iTBS). It is FDA-approved and allows patients to receive treatment in as little as 10 minutes for a much shorter period – five days – instead of six to nine weeks. The SNT Protocol has a 90%+ rate of remission of depressive symptoms. While the SNT protocol requires multiple treatments in a day, the greatest benefit to Stanford’s protocol is the ability to achieve remission in as little as five days.

The SNT Protocol is not covered by insurance yet. However, at Scenic City Neurotherapy, the SNT Protocol is one of the most affordable TMS treatment options in the U.S. Why? Because our mission is to ensure access to novel treatments for people suffering from depression and to facilitate a better quality of life.

What to Expect with Classic rTMS Therapy

Repetitive transcranial magnetic stimulation (rTMS therapy) is a simple, non-invasive, non-drug, therapy that does not require downtime. Patients can immediately return to their normal activities of daily living.

It is important to understand that rTMS is not a permanent cure for depression. However, rTMS does offer long-term symptom relief and remission for nearly 70% of patients. Maintenance treatments are recommended in order to maintain optimal benefits.

Painting the Picture of Major Depression

There are nearly 17 million adults in the United States alone that have experienced at least one major depressive episode in the past year. With the outbreak of COVID-19, the incidence of depression and anxiety has escalated. Although awareness is improving, it still has a long way to go.

Depression, also known as major depressive disorder or clinical depression (and often referred to as treatment resistant depression), is more than just a feeling of sadness. In fact, depression is a serious illness with multiple symptoms that can have a significant impact on both your mental and physical health.

Published by the American Psychiatric Association, the DSM-5 explains that a diagnosis of depression requires at least five (5) or more of the below symptoms in the same 2-week period. Symptoms include:

When medications have been ineffective, or for those who do not wish to take medications, TMS can be a safe and effective alternative that offers long-term relief.

There are many advantages to rTMS/iTBS therapy as a treatment option for depression without any other significant diagnoses. A few advantages of rTMS/iTBS with StimGuide include:

rTMS bypasses common side effects of antidepressants such as:

TMS avoids the unpleasant side effects of ECT therapy such as:

You can achieve long term relief in as little as five days without the shock or induction of a seizure like with ECT.

LEARN HOW WE CAN HELP YOU REGAIN YOUR DESIRED QUALITY OF LIFE.

Julie graduated from Grace Baptist Academy and attended Lee College. She married her college sweetheart of over 26 years. Julie has 20+ years of experience working for major health insurance companies, and she brings her expertise to help patients pursue reimbursement.

Charles Miller is a native of Chattanooga. He studied anesthesia in Nashville, TN through the MTSA program. His time at Vanderbilt provided him with the necessary education and experience in the administration of ERAS protocols that are the foundations for our advancements in pain management. Charles pursued training and greater understanding of the use of Ketamine Infusion Therapy in the treatment of mood disorder and decided to bring these treatment options home to Chattanooga. He brought a best-practice, methods-based approach to improving pain management and mental health.

Connie is a native Chattanoogan who loves spending time with her family and friends. For Connie, life goes better with music, and she enjoys it all. She loves to walk, which suits her well because one of her favorite vacation spots is Disney World. Connie and her husband consider it a good day whenever they get to spend time with any of their seven grandchildren. Connie actively serves her community by volunteering in areas that interest her.

Katherine is passionate about collaborating on efforts that will create long-lasting, powerful outcomes for people’s mental health and well-being. She works directly with Charles and Ami Miller to build relationships with community leaders, mental health professionals, and general practitioners. Katherine’s role includes creating an engaging presence in our community by telling the story of Scenic City Neurotherapy and by sharing the impact of Ketamine Infusion Therapy and TMS on people’s daily lives.

Katherine is involved with the Chattanooga Area Chamber of Commerce, as well as other local non-profit organizations. In her free time, Katherine enjoys baking, weightlifting, and spending time with her friends and family.

Ami is a co-founder of Scenic City Neurotherapy. She has dedicated the last 20 years to working with children of all ages through youth and family programs. She is an expert in teaching camping and survival skills, including knife skills, campfire building, Dutch oven cooking, and tactical Navy SEAL survival skills. Ami is passionate about giving people the opportunity to live better lives. Ami has always been inspired to continue challenging herself to do better in all aspects of her life which pushes those around her to do the same.

Blake is a college student who has grown to love his role as a TMS technician. He is passionate about supporting patients through the process to better mental health. In his spare time, Blake can be found tinkering on cars or rock climbing.

Jason was born and raised in sunny Palm Bay, FL, but now considers himself a Tennessean after moving to Chattanooga in 2004. Jason graduated in 2009 from Southern Adventist University with a Bachelor of Science degree in Nursing. He spent four and a half years working as an R.N. at Memorial Hospital in the CVICU. In 2013, he obtained his master’s degree from the University of Tennessee in Chattanooga to become a Certified Registered Nurse Anesthetist. For the past eight years, Jason has worked full-time in hospitals in the Chattanooga metropolitan area and provided support at other Tennessee regional hospitals through anesthesia administration.

His bilingual (Spanish) communication skills and work with diverse populations set him apart. In his free time, Jason enjoys being with his family, improving his Jeep, caring for his plants, enjoying the outdoors, and organizing an impressive Lego collection.

Chris graduated from Middle Tennessee School of Anesthesia in 2011. He lives in London, KY with his wife of 17 years and four children. After receiving training from Charles Miller, Chris opened his own ketamine infusion clinic in London, KY called Freedom Neurotherapy. He also remains a part-time provider at Scenic City Neurotherapy. Chris was thrilled to find a clinic where he could learn best practice methods that would prepare him to provide better treatment options to the people in his own community.

Elena and her family have enjoyed living in the beautiful Chattanooga area for the past 10 years. She has three busy girls and various pets to keep them company. Elena treats patients receiving our highly specific Transcranial Magnetic Stimulation (TMS), an FDA-approved, non-invasive therapy which has been life changing for so many people. Elena speaks both French and Spanish, in addition to English.

Dr. Keith Perkins Jr. was born and raised in St. Louis, MO. He attended DePaul University in Chicago, majoring in biology. He earned his Doctor of Medicine degree at Meharry Medical College in Nashville. Having found a love for primary care, he decided to train in both internal medicine and pediatrics at the University of Tennessee-Memphis. He became board certified in internal medicine and pediatrics. He moved to Selmer, TN in 2011, where he still resides. He is the owner of Premier Internal Medicine and Pediatrics and is a collaborator for Scenic City Neurotherapy.